In my lifelong career in fashion, I've had the opportunity to work with some amazing merchants. And one of the best was Ron Frasch, head of Saks Fifth Avenue. He introduced the concept of "Good, Better, Best" to the store and insisted that if we believed in a trend or classification, then it should be carried at these three levels. Some people see an item as an investment, others as a one season trend.

I still use this as a parameter when I'm trend forecasting to determine if something has legs for the long run or is simply a one trick pony. We've definitely seen a lot of Fair Isle this season. To put it in snowflake sweater terms, there are heavy flurries with moderate accumulation, but next season? I'm predicting a blizzard.

One of the more interesting takes on the trend is printing it on jersey. I love that it immediately freshens it up a winter classic. These hooded sweatshirts are definitely more comfortable to nap in than their woolen counterparts and can take you right into spring long after you've stored away your sweaters. 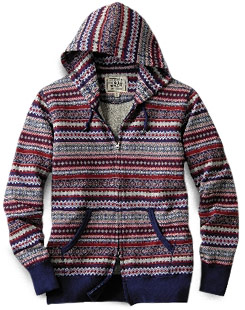 This is the version I bought. Actually, I bought two. They're in about eight different colors, come with a double zip and are lined in French terry—you can't beat the price and value. 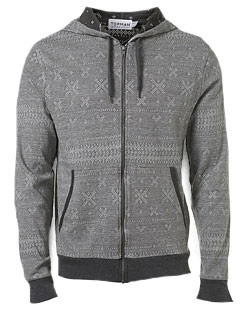 The monochromatic TopMan version is a bit more subtle. And it's actually reversible, so it's really like getting two hoodies for the price of one. 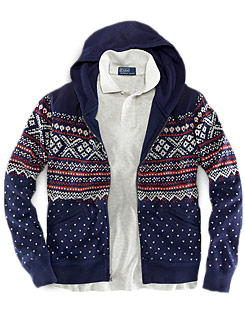 I love this more traditional version by Polo. It's lined in a waffle thermal material for extra warmth and it comes washed and broken in, so you feel like you've owned it for years.