Style At Large
By Michael Macko
Menswear veteran and Valet's Editor at Large, Michael Macko, presents an insider's take on what's new and noteworthy in the world of style.
Western Trucker
Jacket, $148

There are so many collaborations in the menswear market lately that they have become as ubiquitous as well ... as a menswear collaboration. And often times, you like one of the collaborators a whole lot more than the other. It's like ordering in a new restaurant—you may love some of the ingredients in a dish, but not necessarily the others with which they're paired.

See right: The classic trucker, washed and aged, with pockets and a removable Pendleton Wool vest.

That's why I get so excited when I see two brands I love equally come together get hitched. I've worn Levi's jeans exclusively for years. It makes life simpler and quiets down all the noise coming out of the denim world to try this brand or that brand. Within Levi's I have evolved over styles, where I once favored the skinny 511, with a forgiving 2% lycra in it, I now prefer a busted up pair of 501s, usually vintage. I also have several Pendelton blankets, again mostly vintage in those amazing, faded colors. In the dead of winter, I would much rather have three layers of soft, wool blankets on my bed than one extremely heavy down comforter.

The limited edition collection from these two amazing American brands features an exclusive "Levi's Jacquard." Inspired by original Native American designs and woven by Pendleton in reds, golds and shades of indigo, it signifies the colors of a well-worn pair of Levi's denim and has been incorporated into all of the items in the collection. 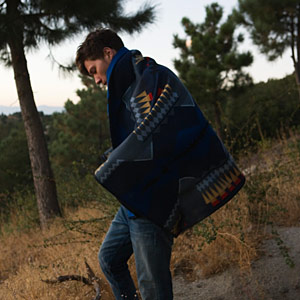 Levi's jeans and Pendleton woolen goods have been the uniform of cowboys, ranchers and workers of the American West for over 100 years and are both still coveted for their rugged refinement and lasting quality. The collection, all proudly made in the USA, hits Levi's retail stores nationwide today and it will be available online at levi.com and pendleton-usa.com. It will also be available at select Pendleton retail stores.

Featuring the Levi's jacquard and inspired by a Pendleton blanket that was first made in the 1880s, it's a heavyweight wool with cotton wrap featuring indigo whip-stitch edging and will come packed in a commemorative box.