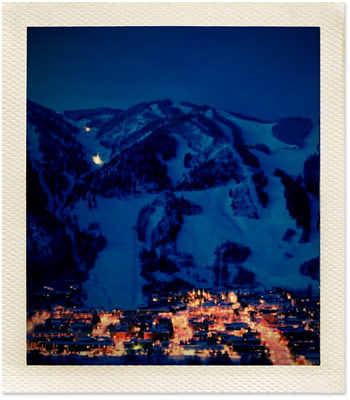 New York, Milan, Paris and ... Aspen? I was a little dubious when the opportunity to attend and style some shows at the third annual Aspen Fashion Week was brought my way. Does the world need another fashion week, I wondered. The answer is a resounding yes.

FYI
Aspen was founded as a mining camp in 1879.

The high-altitude event was created to showcase what's next in sportswear from brands like Number:Lab and WESC along with stylish ski-wear—think Rossignol, Obermeyer and KJUS (pronounced "chuse", and so popular amongst the ski set, its followers are known as Kjusketeers). Locally based lines, like Neve, show as well. Instead of stuffing guests into cramped tents, the shows take place at the Snowstage, a giant outdoor runway built in the center of town with Aspen Mountain serving as the backdrop.

And it wouldn't be fashion week without dinners, parties and other events, one of which was a screening at the Wheeler Opera House of "Bill Cunningham New York" the buzzed-about documentary on the legendary New York Times photographer. After walking around the city for a while, I realized the sidewalks were the real runway and, inspired by Mr. Cunningham, I took out my camera to show you some of the coolest dudes in Aspen.

Oliver is host and producer of the Aspen's Plum TV. When I snapped him, he was on his way to interview designer Jean Charles de Castelbajac in a vest from his collaboration with Rossignol. It's exactly the same piece that I'd have chosen and Oliver gave me a rare case of fashion envy. Oliver was also wearing classic Ray Ban Wayfarers—the most popular shades in Aspen, it seemed.

I caught Oscar changing out of his boots, fresh off the mountain from a snowboard run. I loved that even though he is wearing full performance ski wear, it could completely pass on the streets of any city. I'm loving the striped jacket, the short Timberlands and fresh, white sunglasses. 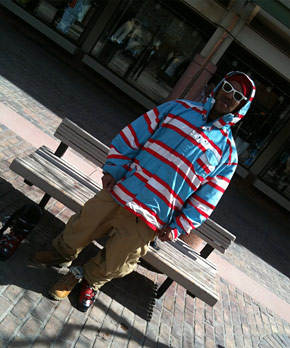 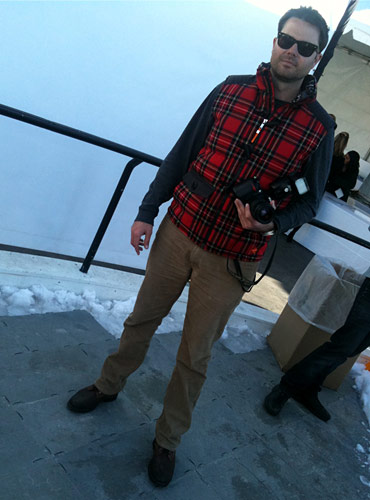 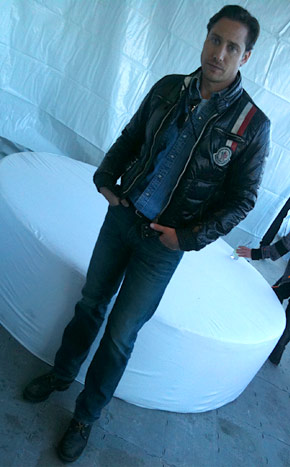 There is no shortage of puffy and oversized jackets in Aspen, but it was refreshing to see Scott in a slimmer, biker style by Moncler. 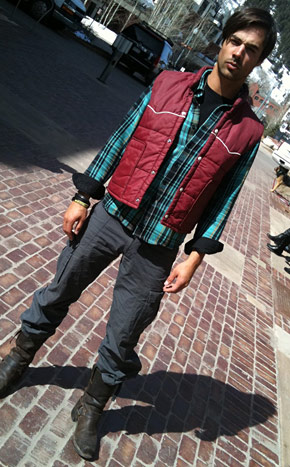 Yes, he is a model, but Kristean's not short on personality or style. He said most of his stuff was vintage including the trim down vest and beat-up Frye boots. 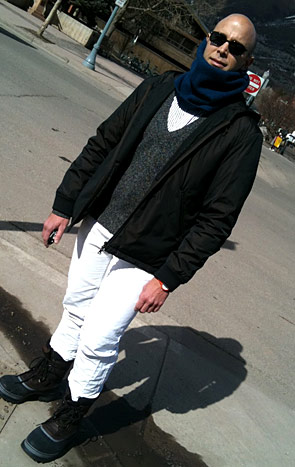 The designer of the men's line Number Lab, Luis, took advantage of the beautiful Aspen weather— which can snow in the morning and give you sunburn in the afternoon—by wearing white jeans with Sorel boots. The scarf was literally right off the runway. 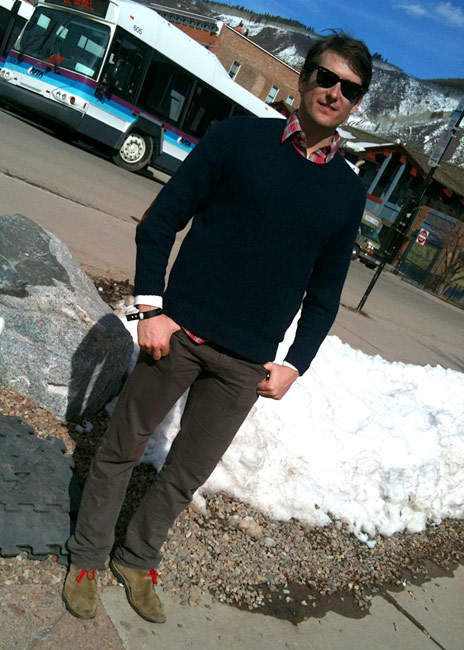 I noticed the red shoelaces right away. Look familiar? They're children's laces that he found in a thrift store. Darrell defines his style as East Coast, adapted for the West with some flannel. He also favors layers over heavy coats and wears thermal shirts every day he is in Aspen. 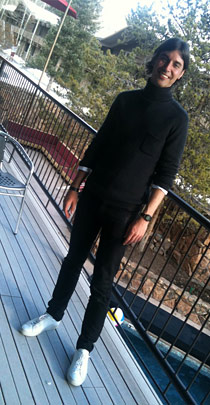 What I liked most about Tom is he wore a collared shirt underneath his turtleneck, an idea I'm swiping from him. The turtleneck is slim cut and has a pocket, so he doesn't look like every other guy in a black sweater. I also like that he didn't go the obvious route with black boots, but paired this all with clean white sneakers.

Nic said his style was to pair vintage with modern and was wearing a plaid shirt from the '70s, paired with a pair of modern cool blue Spyder sunglasses and a plastic watch from Nixon (which covered a tattoo of a tree that grows at their home in Aspen). I also love that he was wearing an enameled St. Christopher medal.