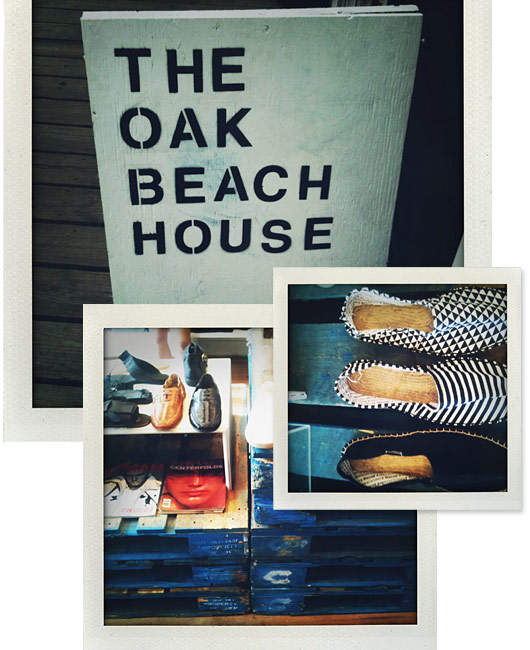 Shopping
at the Beach

When I first heard that OAK, the Williamsburg/Nolita based retailer, was opening an outpost on Fire Island I had a brief experience with the Stages of Grief—I was angry, confused, but ultimately accepted it. You see, I've been going to Fire Island every summer since I've called myself a New Yorker. And one of the most attractive things about it was that there was never anyplace to shop. There were no Commes des Garcons wallets to buy, no Rick Owens tank tops to try on. That's important when you shop for a living—or at least I like to justify it that way.

I've known the shop's owners, Louis Terline and Jeff Madalena, for years so I decided to confront my fears and stop by. If you're not a frequent OAK shopper, they sometimes get a reputation for being a dark, "goth" store filled with black clothing, so you may be thinking 'what are they doing at the beach?' That's the first thing that Jeff addressed. "We're NOT a goth store," he laughed. "We're an urban store, we live in New York City, we wear a lot of black!". He translated that to the beach with a palette of grey, brown, off-white, muted plaids and patterns and yes, black. "Everything that is here at the beach store is in the New York stores as well, it's just in a different context."

As for what you'll find on the racks: Band of Outsiders, Surface to Air and GANT, mix with surf brands like Orlebar Brown, Onia and Soludos, along with OAK's best-selling private label collection. The store also carries things exclusive to Fire Island like hard-to-find magazines, flashlights, Malin & Goetz grooming products, all black toothbrushes and even their own A.OK sunscreen. "I wanted this to be a place where if you came for the day and decided to stay over, you could pick up everything you would need," Louis said.

The location, which for decades had been the Pines Liquor Store, was important as well. Its raw, whitewashed wood with a mirrored back dressing room—a surf shack by way of Architectural Digest. But I had to wonder, how is an "urban" store doing at the beach? "We had high expectations, which have already been exceeded" Louis told me as I walked out of the store (with a black scarf/throw in my OAK shopping bag).

Where's Macko?
Are you around Provincetown, MA this 4th of July weekend? Michael Macko's next adventure is taking him to Cape Cod with L.L. Bean Signature. Follow him on Twitter at @MichaelMacko, where he'll be tweeting clues to his location. If you find him and say "hello", he'll hand you a $50 gift card to L.L.Bean.
«
June 7
Catching Rays