Behind the Seams: Shipley & Halmos

The Dapper Designers On New York, Inspiration and Building a Collection 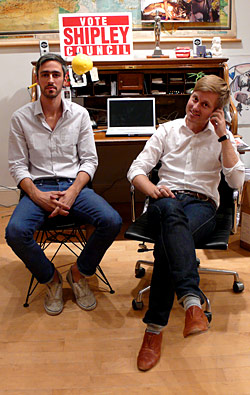 For weeks, Sam Shipley and Jeff Halmos have been holed up in their downtown studio, finishing a highly-anticipated spring collection which shows at New York Fashion Week on Friday. The stakes, it seems, have always been high for these two. As one half of the CFDA-winning quartet Trovata, the designers cut their teeth with quirky, casual clothes based on whimsical story lines. When they broke from the California-based label and headed east, their eponymous label took off in a New York minute.

Gone are the mismatched buttons and Wes Anderson vibe—replaced with expertly-crafted clothes that are both easy and urbane. Still, they're no slouch in the scene-setting department. This collection will be shown on a neon-lighted runway and the invite has backwards type, only deciphered with an attached mirror. Even with the mounting pressure, the easy-going guys were happy to talk shop. 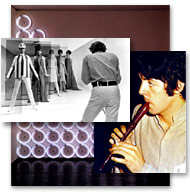 Images from the Shipley & Halmos inspiration board.

The inverted invite (with mirror).

Fashion week is days away. How's the collection coming?

Sam Shipley: Fashion Week is always stressful. What many people don't realize is that not only are we trying to prepare for the show, we are in the midst of shipping our Fall collection to stores and are meeting with buyers for our Spring '09 collection. Everything happens at once!

Is this your first full runway show?
Jeff Halmos: Technically, yes. Last season we did a sort of hybrid runway presentation.

What inspired the collection?
JH: Our inspirations for this season's collection are more broad than one muse or a single inspiration like a film or something. We referenced a series of images from a variety of mediums—mostly outside of fashion—that all evoke the feeling of a new found confidence.

SS: Everything just kept coming back to confidence.

And do you design together or individually?
JH: Actually, a bit of both. Before we start a season, each of us jots down ideas for inspiration, references and silhouettes. We then meet, review everything and start working on a more specific direction. When there's two people contributing creative input, the end result usually is a melding of each of our ideas.

You met in Colorado, became bona-fide Cali boys and then moved to the big city to start this label. Best and worst thing about New York?
SS: The best is definitely the creative freedom. Everywhere you go in this city you are inspired. The worst is probably the smells in Chinatown. Or Canal Street. It's really a toss-up.

A relatively new label has a lot of creative freedom. Is this collection an evolution or a whole new direction?
SS: An evolution. We really tried to expand upon what we've done with the first two, particularly building upon the idea of a wardrobe that can transition easily from day to night.

Well, your signature preppy-with-an-edge style definitely suits you both. Has that always been a part of your aesthetic?
SS: Not really. When I was young, I was wearing baggy jeans, skate shoes and a Volcom t-shirt! I went to high school in a small mountain town in Colorado called Crested Butte. I snowboarded every day during the winter and skateboarded every day during the summer.

From ollies and half-pipes to pocket-squares and cashmere. You've come a long way, sir. I should tell you, we basically want to move into your studio here.
JH: It's a great place to work. Most of the objects found within it are those that have history or meaning to us.

SS: Like the mounted bass on the wall, I actually caught that when I was six and my grandpa mounted it for me.

JH: Everything has a genuine story. And that's the same feeling we'd like customers to feel when they buy our clothes.

What keeps the guys going during fashion week all-nighters? A ready supply of chocolate chip cookies.

When you're not holed up in the studio designing, where would we find you?
SS: Playing music. I started a band with a few friends. It's called War Bonnet. We're planning a big New Year's party for our inaugural show.

Forgetting about next spring for a second, what's your current favorite piece of clothing?
JH: My black Shipley & Halmos twill blazer. I've worn the thing to death.

What's up next for you guys?
JH: We have a few trips lined up after Fashion Week. We're heading to Japan in October, Australia in December. And then we're talking about tagging on a visit to New Zealand. Neither of us have been before.