Get to Know: Andy Salzer

The Mastermind Behind Yoko Devereaux 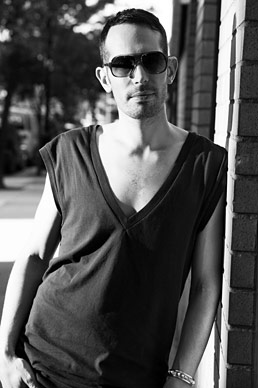 If you happen to run into Andy Salzer, don't try to tell him about the time you met his label's namesake. She doesn't exist. The moniker was conjured up by the whip-smart designer as an illusion. "I didn't want this to be about ego," he says. "I wanted it to be about the designs." The Seattle native wasn't formally trained in fashion, but the growing success of his seven-year-old brand certainly suggests he knows what guys want—well made clothes that are tailored yet comfortable. One of his signature pieces is a blazer cut from cotton sweatshirt material. What's more, the pieces are priced at a range even a displaced Wall Streeter could afford.

Growing up, Andy was a Boy Scout.

How'd you get started in the business?

Honestly, I wanted items that I couldn't find anywhere else, so I opted to design my own clothing. It was born out of the holes in my own personal wardrobe.

Tell me about the name.
The fashion industry is more about creating a great story as the backdrop for clothing, rather than the design itself. Whether that's good or bad is a whole other conversation. But, creating a name or identity that is a product of the industry is really a comment on the state of the industry. That marketing is really taking a front seat to much of the work.

How often do you get someone saying they know her?
All the time. The best is when people try to go 'over my head' and reach Yoko Devereaux. As if that's going to work. It's hilarious.

Best and worst part of being in the fashion biz?
The best is always when you see guys wearing your work. You just want to run up to them and thank them. The worst? The realization that the creative process represents only a small sliver of the work you have to do. Designing a collection is obviously one step of many before you see the vision in your head realized and on a guy on the street. And of course, those are the painful parts, but it's worth it.

Who's the Yoko Deveraux guy?
A guy that has nothing to prove to himself or to anybody else. He's got a sense of humor. While I take my work very seriously, I like to think that my customer can keep it all in perspective. Style is important, but come on, we're talking about clothes here.

A die-hard Brooklyn resident, Andy opened the Yoko Devereaux shop at 338 Broadway (Between Rodney and Keap St.) in Williamsburg in 2006. Here's his guide to the neighborhood.

Does your personal style translate into the line?
I've always been one to mix up what I'm wearing. Specifically, I mix and match a lot of my own designs with other designers or vintage. So, Yoko Devereaux definitely allows you to pair items with lots of other clothing that you own. It's important to create an aestetic that has that versatility, especially for men.

Has that always been your style?
Well, I was voted 'biggest wardrobe' senior year of high school, if that says anything at all. Clothes reflect your personality, your mood, your outlook and they say a lot to everybody around you. It's a visual communication each of us explores every time we get dressed. That personal view has always been important to me and has definitely shaped Yoko Devereaux.

What was the inspiration behind the fall collection?
I was really into finding a balance between nature and the city. It's a challenge that we're faced with all the time—that balance between natural and artificial. So while many of the designs are very sleek or sharp, there's a softness to balance it out. I think it's seen strongest in the hooded overcoat—that's definitely my favorite piece. It's really strong from a design perspective, but it's made of fleece, so it's really comfortable (like your favorite hoodie). And the t-shirt graphics too—the use of a lot of nature imagery, but then fused with shiny foils (like gunmetal and gold).

From the fleece pieces to your jewelry collection there seems to be a real balance between old and new styling.
Classical menswear needs to constantly be dusted off and reinterpreted. Keeping classicism relevant is always the challenge. While everything changes and evolves, so many designers want to throw the past out the window and totally reinvent the wheel, which is a totally different design perspective than my own. I think it's more challenging to reinterpret. How do you make a simple dress shirt interesting and fresh and wearable from season to season? That's actually really tough to do.

Do you have any upcoming projects you can talk about?
All the stuff is hush, hush. But 'eye' bet you'll guess it based on that awful pun.

When you're not designing, where would we find you?
Working on something else, but still in my studio. I work too much. It's not a super sexy answer, but it's honest. I guess I should lie and say I was traveling extensively, Actually, yes, I'll just lie and say that. Greetings from Berlin—it's lovely here!