Behind the Seams: Scott Sternberg

The Band of Outsiders Designer Chats About His Most Recent Endeavor

Scott Sternberg created his Los Angeles based menswear label Band of Outsiders in January 2004 by reinventing classic fabrics into skinny ties and shrunken oxfords with retro details and hand-tailored seams. Soon, the small line expanded to include an ever-growing collection of suits and knitwear, as well as a cleverly titled women's line named Boy. We caught up with Scott, who recently took home a CFDA award for emerging talent, to chat about his summer project—a collaboration with Sperry that will continue into his collection for fall. 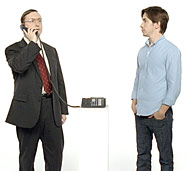 Justin Long, who is not an Apple computer but plays one on TV, has worn Band of Outsiders in the "Get a Mac" commercials.

Was this Band of Outsiders' first collaboration?

Yeah. It's always been an interest of mine, to search out certain heritage brands to work with. Both American and European and this was the first time an opportunity this good presented itself.

So how'd it come about?
I was working on the spring collection and began thinking about the shoes. They carry such a nostalgia for me and my customer. And it just made sense, so I just called the CEO. It's a pretty small organization so it was easy to speak with them. I'm not sure if he'd heard of Band of Outsiders, but they've got a really cool PR team in New York that told him 'yeah, you should really do this.'"

And how do the shoes fit into your guy's lifestyle?
They make sense in so many ways, they draw upon this Ivy League DNA that of course, I'm fond of but then they're so easy and comfortable. It's sort of like my ties and shirts—they have a sense of formality, but they're really easy, young and colorful.

Tell me a little about the creative process.
I sort of had this romantic notion and there'd be these wonderful archives and I'll find this treasure trove. But they've made the same shoe for like 100 years, and they just keep making it, so there really was no archive.

So I asked them to send me a bunch of their Authentic Original boat shoe that they still make. And then I just took 'em apart and simply tried new ways of putting them back together. There's a slip-on loafer done in a very cool inside out style. The style number, and the 'Made in China' is all exposed.

We really didn't add any pieces. For each shoe, we allowed ourselves to add one piece, if it was necessary and it really only turned out to be, like a piece of elastic, when we removed the laces.

Were these shoes in your own personal history?
Oh, definitely.

Like, what was Scott Sternberg wearing in high school?
Oh man, high school was tough, you know? You're influenced a lot by your peers and constantly trying to fit in. Essentially, I was this guy. But then in college, I was more free to be myself. I was much more confident in my style and how I dressed, but, yeah these shoes have always been a part of my wardrobe.

I just love them. It's such a funny little shoe.

So what was it like, designing a shoe?
It was a really academic process. It was about creating something new. And I treated it very much like a conceptual exercise, much like I design anything else for the label.

I remember, after I placed the call to Sperry's CEO and got the official okay, I paniced. I hung up the phone and was like, "Fuck, I've got to design a shoe!" Because I didn't want them to be this fashiony-interpretation, that are all pink patent leather, or some ugly glittery mess.

You always walk a fine line between traditional and modern ... what do you look for in a collection as a whole, when designing?
It's a trick. Truthfully, it takes a ton of confidence. I mean, when your designs aren't all over a garment, I think you tend to question yourself as a designer. But I try to balance it all out and start with really broad strokes and ideas and then reign myself in and see what my customer needs and wants.

I try to make something that feels cool and looks very now. And not worry if something's looking a little too Ralph Lauren 1992, because some influences always get mixed in. But fashion is all about context, about time and place, more than anything else.

Band of Outsiders is available online at eLuxury, as well as at Jake in Chicago, South Willard in Los Angeles, Blackbird in Seattle and Barneys stores nationwide.