It's about being subtle and understated, giving the guy garments which only will get better with age.

Behind the Seams:
Frank Muytjens

Meet the Man Responsible for the New J.Crew

By Cory Ohlendorf of Valet.

Last year, when Frank Muytjens was appointed as J.Crew's Vice President of Men's Design, the company was on the cusp of a cultural change. They had been updating their men's line, improving quality and style but were hoping to elevate the brand during this renaissance of American menswear. Muytjens was the right man for the job. He had been designing at J.Crew for four years, but previous gigs at Ralph Lauren, first at the rugged RRL and later at the more refined Blue Label, also prepped the Dutch-born designer for J.Crew's new place your wardrobe—where suits mix with Red Wing boots or a Mister Freedom T-shirt is topped with a classic Barbour jacket. We caught up with Mr. Muytjens to learn more about the man behind the brand and what to look for this fall.

You were born and raised in the Netherlands and ended up designing for two of the most quintessentially American companies ...

Growing up, I was always drawn to the historic part of American culture. I had this romantic idea of crossing the US in a camper, visiting the national parks and other iconic places. But it wasn't until I visited New York for the first time, in 1985, that I fell in love with the city and really got interested in all things Americana. I had just graduated from college, and I remember being heavily influenced by that trip. I remember in my final project I used dollar coins as buttons on sportcoats, and I enlarged parts of dollar bills, using them as Warhol-esque graphic prints on old army sweatshirts.

So before you discovered Americana, what were some of your influences growing up?
It was just as punk and new wave were about to blow up and show their influence in fashion. Everything that came from London seemed so new and innovative. Fashion and music magazines like The Face and ID—and later Vanity and Per Lui—were a huge influence on me.

When did you know you wanted to be a designer?
I started out as a fashion illustrator in college. I always thought the works of Antonio and Mats were very inspiring, but gradually I realized I enjoyed designing, pattern-making and sewing much more. It was just a natural evolution.

Describe your design process ...
It's a combination of thinking about who our guy is, what music he listens to, what his house looks like. We build a story. I find inspiration in everything from street fashion to old films. I tend to immerse myself with materials like tears from books and magazines, fabric swatches, vintage pieces, movies, old album covers and found objects. The line really grows from there.

Your experiments with collaborations have been really successful. Have those been important to push the men's line forward?
Yes, I think they perfectly represent our aesthetic. For us, it was about building relationships with brands who have a story to tell, brands with an old world feel, brands who have been doing what they've been doing for over a century and haven't change their product—or logo, for that matter—because of trends.

And how do they come about?
Most of the brands we now carry are brands that have been personal favorites for many years. The team and I have always been huge fans of Red Wing, Russell Moccasins, vintage Levis and Alden. We've been wearing them forever ourselves, so it was an easy connection for us to make. 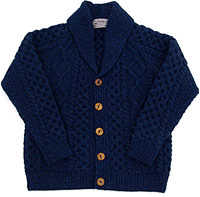 Any upcoming ones you'd like to tell us about?
I'm really exited about Inverallan, a traditional Scottish knitwear company specializing in Aran fishermen's sweaters. We're doing a limited edition collaboration with them for this fall.

J.Crew really excels at those small changes and tweaks to classics which make them seem modern yet timeless. Would you say that's the right read?
Absolutely! To us it's about being subtle and understated, giving the guy garments which only will get better with age, pieces you can wear more than one season. I think in menswear you have to be consistent and persistent.

Some of Frank's Favorite Looks for Fall