Skip Navigation
July
28
2010
By
Jian DeLeon
for Valet.
Get to Know:

Sean Carrasso first got into the nonprofit sector as a volunteer for Invisible Children. But it wasn't until he participated in a TOMS shoe drop that he would experience firsthand the grisly fate of some Congolese child warriors. His life-changing time in Africa made him realize that even if he couldn't solve the many problems surrounding the region, he was still going to do something about it. Sean's story became the basis for Falling Whistles, a company with a great cause and unusual product: working brass whistles. Valet sat down with Sean and had a lengthy conversation about socially responsible goods, the beginnings of Falling Whistles and being the change you wish to see in the world. 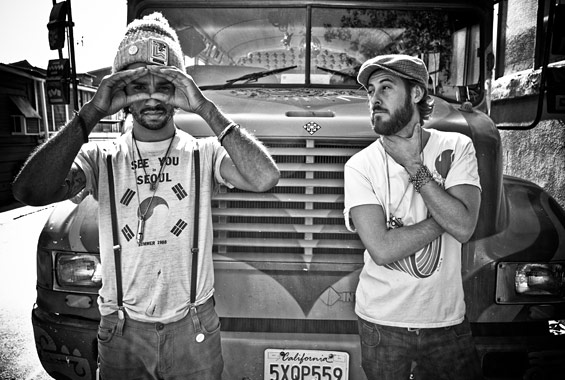 This all started with a blog. Explain the significance of the Falling Whistles journal.

Basically, I went to Africa with TOMS for the first shoe drop, and was inspired to get really lost. I spent three months backpacking and ended up in the Democratic Republic of Congo. The idea was to stay for five days, learn all we could, then get out. At the end of the fifth day, we found this military camp that was beating and torturing former child soldiers. We learned that the kids who were too small to carry a gun were being sent to the front lines with nothing more than whistles to distract the enemy. We exposed it to the UN and the kids got pulled out. It was an intense day. That night, in tears and chugging red wine, I wrote this blog called "Falling Whistles" and sent it to friends and family. They literally forwarded it around the world. I woke up to an inbox full of emails asking how people could help. It was the moment that woke me up.

A Congolese boy watches as soldiers pass by (above); Carrasso with Mai Mai Rebel leaders.

The quote: "If you came here to help me you are wasting your time, but if you came because you believe your liberation is bound to mine, then come and we can walk together," seems very important to your mission. Where'd this come from?
I think what we found when we walked throughout Congo was that the way the world currently does charity is almost destructive. There's a lot of handouts. But within the Congolese people, there are visionaries everywhere. They were intelligent, people of conviction—of principle—they worked hard, had big dreams, but they were stuck in these systems that were keeping them down. The quote was originally from an aboriginal who said it to this group of missionaries. The idea is that it's not about charity at all, it's not about pity. It's about solidarity.

And the whistles? How did they come to be?
As I was traveling, I had this unforgettable image of whistles falling from hands which was this visual force moving me forward. When I came home with my long hair and big beard, my friend Marcus came and put the whistle around my neck. At the time I was just screaming at my friends like "Kids are dying!" And basically, I stopped getting invited to places. Nobody wants to hang out with that guy. But with the whistle, I could just go to these parties and people would ask "What's up with the whistle?" and we got to engage in a conversation about Congo that wasn't forced. We realized how important it is to be a whistleblower, and that's a fundamental idea in what we do.

They certainly make a great conversation piece. What led you to mass produce them?
I think what it's become is our symbol of protest. The peace symbol is in some ways impotent because it's ambiguous. The whistle is very specific. It stands for changing the conversation here so we can change reality elsewhere. So it's become our symbol as we pursue solutions in a region where they're in short supply.

How do you guys normally wear them? Does everyone wear it as a necklace?
People wear them in so many ways. I like to wear it with a leather strap, a lot of my buddies use them as keychains, people have them around their rearview mirrors. We have a lot of guys who make jeans wear them as a chain and hang from the back pocket. We had Sahr Ngaujah from 'Fela!' wear a mini-whistle off his glasses at the Tonys which was super dope.

And where are they made?
In London, by the top whistle manufacturer in the world, actually. It turns out whistles are really hard to make. Then we bring them back here to Los Angeles and wash them and add finishes.

How did you source the materials?
The metal's brass nickel is sourced out of Germany. We're working on melting down guns from the Congo and using that metal to create some whistles.

In the realm of socially responsible goods, what other ways do you think consumers and producers can do something wholly-good and sustainable?
You have to know where your products come from. You've got to trace it all the way back to the source and make sure that at every stage along the way, the laborers are being treated fairly. You can't separate profit from purpose. That's not gonna be a trend. And there will definitely be "green-washing" that will take place, there will be "moral-washing" and "responsible-washing," and all of that, but the more transparent we get and the more transparent that we demand our brands to be, the more we're gonna be able to weed out the fakes.

You've got some great in-store installations. How do those come about?
Our challenge is to change reality as we know it—create a 21st century without genocide—so we have to create new distribution channels that impact people in new ways. When you go to a magazine rack or log onto the Internet, there's so much information that you're pretty overwhelmed by it. But if you go to a store and you see this artistic installation, it's the only educational thing you're being inundated with at that moment and it affects you. The cool thing about it is that it's an income-generating, sustainable museum that gives the boutique financial incentive to educate their community. And the more educated their community is, the more whistles they buy. You've now created sustainable advocacy and that's what's fundamental to me.

Where was the first installation?
The first real one was at Fred Segal in LA last November. They're just down the street, so we went there for coffee and told them what we wanted to do and they said, "Cool! Here's this thirty foot space with a big window." So we found an old fence and tore it down and we used that as the wood. It cost us almost nothing. There's three or four metaphors that are built into the installs. The first is whitewashed wood, the idea is all throughout Congo you see these walls that have been painted white, to create order out of chaos. The second is we use all recycled, repurposed materials—it's a resource war in Congo, so if it already exists why create more? We try to take tools of war and turn them into tools of peace, so you see that in ammo cases, grenade cases, bullet holes, all of that. And lastly, we use light boxes a lot, the idea is to illuminate truths that have historically remained in shadows. And you know, in the three months the installation was up, we sold enough to be in the store's top five brands for the entire year. We raised tens of thousands of dollars for rehabilitation, educated over 15,000 people and got some good press. It's a win for everyone across the board.