Skip Navigation
Aug
10
2010
By
The Staff
of Valet.
School of
Denim
Few items of a man's wardrobe are as essential as a pair of jeans. This series offers up style tips and history lessons about America's greatest contribution to the world of fashion. 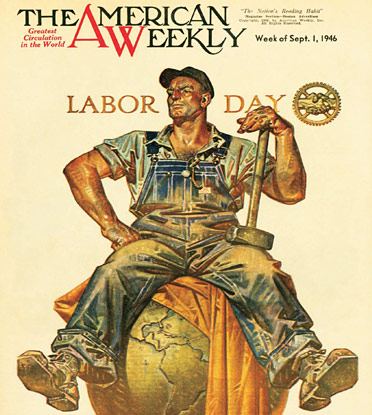 J.C. Leyendecker was one of the pre-eminent American illustrators of the early twentieth century, best known for his fashion and menswear illustrations for various posters, magazines and advertisements. It was Leyendecker who created the popular Arrow Collar Man for the Arrow menswear label. While most of the men in his more than 400 magazine covers were more of the preppy, suited type, for the 1946 Labor Day issue of The American Weekly magazine he focused on the working man dressed in dungaree overalls, a chambray shirt and work boots. Styled with crisp, rolled sleeves and rumpled cuffs on his jeans, the man is strong, stoic and uniquely stylish. It was one small step for an illustrator, but a huge leap for work wear—pushing denim into the nation's consciousness and equating it with something honest, hard-working and most of all, American.

The American Weekly was a Sunday newspaper supplement published from 1896 to 1966 that once boasted a circulation of more than 50 million readers.
«
Gentlemanly Jeans
»
The Essential Denim Glossary