Skip Navigation
Sept
28
2010
By
The Staff
of Valet.
School of
Denim
Few items of a man's wardrobe are as essential as a pair of jeans. This series offers up style tips and history lessons about America's greatest contribution to the world of fashion. 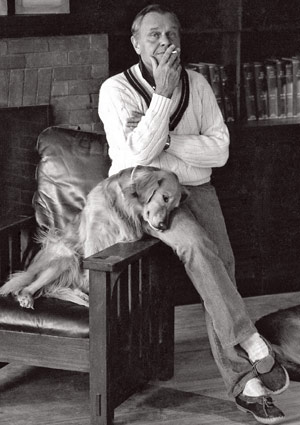 Iconic American fashion designer Bill Blass was born in Fort Wayne, Indiana and spent time in the US Army fighting during WWII before he started designing. Perhaps that's why he was best known for real, wearable clothes that celebrated American sportswear. He was also known for mixing patterns and styles, as evidenced by this look, photographed in his den in 1982, wearing jeans with an old school tennis sweater and L.L. Bean duck boots. Make note of the jean's length—stopping just at the top of his shoes—which keeps his off duty style from looking too sloppy. It's Americana at its best and proves that you're never too old (or young) for a pair of well-worn straight leg jeans. The golden retriever might be considered overkill if it wasn't so damned perfect.

In 1976, Blass began designing a signature edition of the Lincoln Continental Mark series of cars.

Style is primarily a matter of instinct.

- Bill Blass
«
How to: Pull Off Black Denim
»
Anatomy of a Classic: The Jean Jacket