Skip Navigation
May
27
2010
By
Jian DeLeon
for Valet.
The Legend of

The origins of the Reyn Spooner brand can be traced back to 1949, when Reyn McCullough had his first menswear shop on California's Catalina Island. Ten years later, McCullough would stab westward and purchase Spooner's of Waikiki, a Hawaiian surf short company.

One of the few American heritage brands cultivated on the West Coast, Reyn Spooner's claim to fame occurred when McCullough combined his love of worn-in, sun faded and salt bleached fabrics with a desire to make the floral "Aloha" shirt less ostentatious. His solution? Simply turning the fabric insideout. This "Spooner Kloth" was used to make a variety of prints, many of which still sit neatly folded in the company's archive.

In addition to the classic short-sleeve, full-placket shirt, the brand features popovers, long-sleeved shirts, and preppy details like button down collars. The line has been so successful that its flagship Reyn's store in Honolulu's Ala Moana shopping center is one of three original tenants that haven't budged since 1959. When Valet stopped by recently, store manager Suzie Metivier told us all about the company and its visible ties with island culture—from the surfboards on the walls and the outrigger canoe suspended from the ceiling, the vibe is certainly more "beach boy" than "city slicker." And while the preppy roots are clear, the brand is decidedly less uptight than the East Coast Ivy-league staple Reyn's is often compared to—Brooks Brothers.

Hawaiian shirts were originally made from scraps of women's muumuus (pronounced mu'u mu'u on the isle).

Today, creative consultant Gordon Thompson and designer Alice Chen-Galloway continue to evolve the label. By updating the fit and unearthing prints from the company's archives, the new Reyn Spooner is poised to be Hawaii's biggest export since you-know-who.

While there are plenty of floral and Japanese block-inspired prints, the modern-minded brand isn't afraid to branch out to pieces like solid linen shirts. The fall collection being rolled out later this summer features nautical-themed shirts, soft corduroy shirt-jackets and cardigans with aloha-in-the-details: under the placket is a subtle floral print.

This new direction culminates in two new retail ventures: the first being the recently-launched Reyn Spooner website, followed by an upcoming Reyn Spooner store dedicated to the new brand, set to open in Waikiki in July. Select pieces will be available in the traditional Reyn's men stores.

Shirts from $83 at Reyn Spooner.

The first Reyn's store, which opened on Catalina Island.

In His Own Words

We sat down with Thompson to talk about the rebirth of this classic brand, as well as some tips on how a guy can pull off an aloha shirt:

Reyn was once called the "Brooks Brothers of the Pacific," how does the new line reflect that legacy?

The heritage is our guide post. From print and color selection, to pattern design, to styling, to even the selection of props for the photo shoots. I'm obsessed with that combination and how to bring it to life. 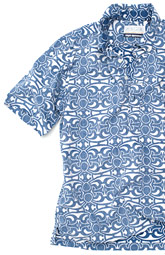 What's most important when a brand wants to dig into its heritage?
Whenever a brand wants to revive itself—whether it's Cole Haan or Disney—you have to dig to the core of what made it great. What's unique to the brand's DNA? For Reyn Spooner, it's the original surf-meets-prep-meets-Hawaii concept. That combination feels even more relevant now.

How do you dress up an aloha shirt?
I love them with a knit tie and unconstructed blazer. I think when you have all the dress elements but put a casual spin on them, it works well. It simply becomes a patterned shirt. But, it all depends on color, print and fit.

Say you're someone who's not too keen on patterns but want to have just one fun shirt for when you're feeling festive, what style is the most versatile?
I'm of the school of "go big or go home." There is no such thing as a timid print. Either go for it, or be a wimp and wear a solid shirt.

Your summer 2010 swimsuit buying guide. How to find the right suit for your body, skin tone and well, perceived fitness level.

We're seeing a lot of shirts for summer that look like they've already had some good times.

Red pants? Green shorts? A pink shirt? How to wear bold colors like a man.