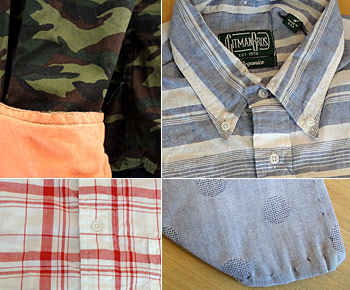 Commonwealth, the cult-favorite East Coast shop, has been evolving from their streetwear roots as of late and getting into more classic men's territory. Recently, they've picked up lines like Creep and The Hill-Side, released some sought-after US-made timepieces and now, they've released a collaboration with American shirtmaker Gitman Vintage. The collection ranges from the subtle (a short-sleeve mint oxford, a red plaid button-down and a monochromatic polka dot print), to more bold choices (horizontal striped linen and an on-trend camouflage shirt with blaze orange contrasts at the insides of the collar and cuffs). They've also cut two ties from the shirting material to complement the collection. Right now, they're only available in-store, but they should be hitting the web later this week.