Skip Navigation
Oct
5
2010
By
Jian DeLeon
for Valet.
School of
Denim
Few items of a man's wardrobe are as essential as a pair of jeans. This series offers up style tips and history lessons about America's greatest contribution to the world of fashion.

Anatomy of a Classic: The Jean Jacket

While denim outerwear has seen many incarnations—especially in naval-inspired items like chore jackets and pea coats—nothing is as quite as versatile, or iconic, as the button-down jean jacket. Few pieces of a man's wardrobe are as comfortable as they are durable. And adaptable to nearly every style and color. Which may explain why every guy will likely own one sometime in his life.

The 1936 Type 1 jacket was recently revived by Levi's Vintage Clothing. $250, at Context

The jacket first appeared around 1905, and it was meant as a protective piece to accompany rugged denim pantaloons. The original Levi's 506XX jacket was made from 9 oz. denim and referred to as a "blouse" until the late 1930s, when it officially debuted as a jacket in the company's catalog. This single-pocketed, buckle-back jacket became known as the "Type 1," which gradually evolved into the familiar double pocketed version in 1962, when the 557XX "Type 3" jacket was first produced.

For a while, donning a denim jacket with your jeans acquired the unfortunate nickname of the "Canadian Tuxedo," but now it's generally acceptable to wear both casually so long as one piece is two shades darker than the other. Of course, true badasses just don't care. Some styles come lined in shearling or flannel, ideal for colder months, but these jackets were made to layer, so why not pull it over a sweatshirt or cardigan? We've even seen slimmer versions paired under blazers, bringing a bit of rebellion into the work week.

While the familiar construction of the jacket has been re-interpreted into a variety of fabrics—corduroy and twill being the most common—nothing really evokes easygoing, American ruggedness as much as denim. Wear a crisp, inky blue version with an oxford cloth shirt and chinos for a '50s collegiate look. Or go for something tougher with a washed and ragged style. Just remember to keep things simple, clean and cut close to the body.

This vintage jacket from between 1910-1920 won second place in a contest where Levi's sought to find the oldest jacket. Featuring smaller buttons, a lower pocket and selvedge seams throughout the interior, the jacket is currently on sale for $4,025 by Christie's. 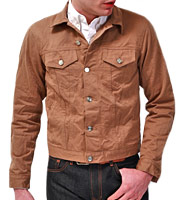 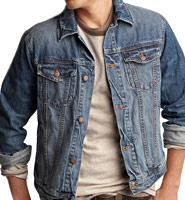 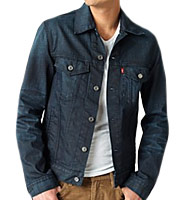 «
Great Moments in Denim History
»
How to: Break In Your Denim