Skip Navigation
Sept
29
2009
By
Jian DeLeon
for Valet.
Get to Know:

Matt Hessler and Patrick King are two very different men with very similar tastes. Hessler's an entrepreneur with plenty of experience in start-up businesses. King is a longtime tattoo artist with a keen eye. Both have an astute attention to detail and a love for the ruggedness evoked by their home state of Colorado. When they decided to start ELC Mens (pronounced like "elk") in 2007, they brought in art director Cristian Whitney to round out the team. Taking its name from a familiar road Hessler and King traversed during a Spanish cross-country motorcycle trip, ELC may be the best up-and-coming label you've never heard of.

King: Colorado always had a certain feel to it for us. A ruggedness, a little bit of that frontier spirit. At first we were kind of hiding that we came from Colorado, but as the brand developed, we saw we could have the same standards of quality as brands in New York and LA.

What were your guys doing before you started ELC?
Hessler: As we build the brand we're all still working our day jobs. Patrick is a full-time tattoo artist, Matt runs a small web marketing agency, and Cristian is the art director for a mobile content company. Unlike other labels that take on investment capital or come from money, we've had to bootstrap to get the company off the ground ourselves.

That's commendable. Matt has previous start-up experience, how did that affect your approach with a label?
King: HIs experience has helped us a lot and it's more than just the fundamentals like making a business plan. Matt really enjoys doing a lot of the sourcing, finding a relationship between the materials, and running a self-employed business allows us to focus on the label. Cristian was the missing link for us. We didn't have the skills to put together a lot of the print and web stuff we wanted to do, so we brought him on to bring that one extra layer of expertise.

Patrick, has your background as a tattoo artist affected the aesthetic of the line?
King: Well the last thing you want is people thinking this is something like Ed Hardy! You'll never see some heavy graphics, though as a tattoo artist you're always drawn to aesthetics and pay attention to detail. Plus, I've taken a lot of classes in pattern-making and fabrics, along with interning for some womenswear designers in New York like Helena Fredriksson.

Who is the guy you're designing for?
King: Rugged yet refined. He's got an appreciation for finer things and appreciates craftsmanship. The line itself is a true representation of who we are and how we live our lives. It's really experience defining design. If we design a motorcycle jacket it's not like we haven't been on a motorcycle before. [Editor's Note: See FYI below.]

What would you say is most important to the label as a whole?
Whitney: Nearly all the line is made here in the US. Shirting is kind of a big deal for us, so there's about five different styles. We want the line to be affordable and attainable, but we also try to use noble and natural materials because we want to create garments intended to be lived in—that way they just get better with wear. 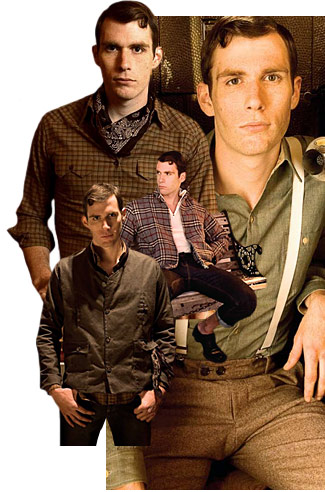 What was your inspiration for fall?
Hessler: We place huge value on travel, so the whole collection was inspired by a romantic notion of transients.

Did we see a blanket in the collection?
King: Yes! That's one of our favorite items that, sadly, never made it to market. It was inspired by the bindle rolls that hobos traveled with, hopping trains. Our updated version combines the warmth of a thick wool blanket with a removable canvas backing. The canvas backing keeps the blanket clean and dry as well as providing a small pocket for keys or other small items.

Think it'll ever come into fruition?
King: It was one of those ideas that just kind of came out—like, 'Damn, what a great idea!'—something to round out the collection. We'd like to revisit it in the future.

Speaking of the future, if fall was inspired by boxcar transients, what can you tell us about next spring?
Whitney: As we were gearing up for spring, Patrick was fixated on "crimes of passion" and betrayal. It kind of evolved into being about John Dillinger—who he was as a person and the cast of characters that were there the night he was killed: a kid selling newspapers, a cop, a journalist. There's a lot more color, a lot of red of course, and the details are bit more subtle. We have a piece called the "Flat Foot Raincoat." Policemen were called flat foots and the coat is styled after ones they wore back then.

Covering the pants, debut, trend and classic over four weeks.

The fearless fashion designer mixes his prep with some punk.

This master tie maker is the neck's big thing.