Because of its sueded texture, anything made from moleskin has a casual air to it. You can dress it up, but it's always going to be more laid back. Like a pair of well-worn boots or a plaid shirt (which aren't bad accompaniments). 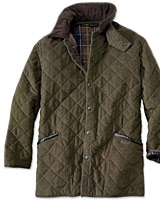 Warm and resistant to wind and rain, it's not surprising that the majority of manufacturers of this cloth are British mills. Barbour began using it in their hunting gear and continues to utilize the fabric in much of their outerwear.

Where to Find It

Billy Reid, Dolce & Gabbana and Adam Kimmel are just a few of the designers that used the fabric in their fall collections.

A
60-Second Guide to

First thing's first: Moleskin is not, in fact, made from the skin of moles. It's made from a thick cotton fabric that's been brushed and sanded to create a slightly fuzzy pile on one side. Think corduroy without the wales. Soft yet durable, it makes for an ideal alternative to wool used in jackets and trousers.