Skip Navigation
July
20
2010
By
The Staff
of Valet.
School of
Denim
Few items of a man's wardrobe are as essential as a pair of jeans. This series offers up style tips and history lessons about America's greatest contribution to the world of fashion. 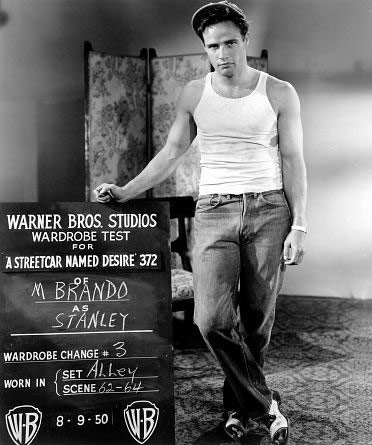 The young actor's turn as the animalistic auto-parts salesman Stanley Kowalski in the 1951 film "A Streetcar Named Desire" made the 27-year-old Brando a star. A skilled method actor, Brando's wardrobe was key to developing the character. A brute, blue collar kind of guy, Kowalski would of course wear jeans with his sweat-soaked undershirts. What we really appreciate is the touch of Southern gentlemanliness in the spectator shoes. Well played.

"A Streetcar Named Desire," $10 at Amazon

After this film, Brando was asked to do a screen test for the lead character in "Rebel Without A Cause."
«
Summertime Blues
»
Pull Off White Denim