Tweet this story for the chance to win a Natural Badger Shave Brush.

B.D. Baggies was launched in 1986 with the idea of giving guys a shirt that felt like they've had it for years. The label's signature was a dress shirt with a casual attitude. Prelaundered for softness, the relaxed-fit shirting came packaged in small laundry bags. The concept quickly took off, but by the mid '90s, the brand wasn't innovating and was eventually bumped off the radar by upstarts like Steven Alan. Three years ago, W.P. Lavori—the Italian company responsible for installing Daiki Suzuki at Woolrich Woolen Mills—took over the company and started searching out the right man for the job. Their first choice? Save Khaki's David Mullen who, in a short time, has made a name for his label as the cool guy's choice in chinos. We caught up with Mullen to find out what we can expect from the new B.D. Baggies.

So, how did this all start?

I met Andrea and Francesca of W.P. the first time I showed Save Khaki on the trade show circuit. I didn't know much about the company, and they were one of the first to walk into my booth. There was definitely a connection with what I was doing and we kept in touch. Then, when they decided to relaunch B.D. Baggies, they came to me. But I was reluctant to do it at first and ...

Reluctant?
Well, I wanted to focus on Save Khaki. Building a brand can be tough. And, of course, so can reviving a brand. But the more we spoke, I felt a real kindred spirit. And they've got such a great track record of making labels relevant again. 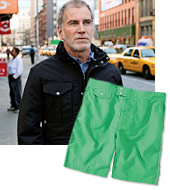 I love the idea of wearing really bright nylon shorts with an oxford.

Did you remember Baggies from back in the day?
I did. I actually remember when they first hit the scene, they were a pretty big deal. They might've been the first to do a really soft, washed shirt and then they stuffed it into this muslin bag.


Did you own any?
I don't think I owned any, actually, but I do recall thinking 'here's a great shirt and it's affordable.'

And was that something you wanted to maintain?
Definitely. There's a little history there, but not so much that we're constrained by it. But at its heart it's a simple, affordable, modern shirt.

Tell me a little about the process.
The first thing I wanted to do was know everything I could. We were going through the archive, looking at shirting fabrics, swatches and fits. And honestly, you could see why it sort of fizzled out—they let some time go by. So I insisted that we start with a blank slate. I always say, if you could go back to the founder, how would he do this today? Because the silhouette's changed. How we dress in general has changed.

The design seems to pair well with Save Khaki.
I think they both appeal to the same guy, yeah. I wanted to keep them separate though. But one thing they've got in common is that we don't design for design's sake. We don't need to put a pocket on something just to add a pocket, you know? And that's always felt really modern to me. We like things to be soft, fit well, and go with a lot of the things in your closet.

Very all-American.
Exactly. The beauty of American style is that it's this melting pot of ideas and inspirations. It's a little bit of utility from work wear, there's some influences from Italian finishing and British tailoring.

The Collar: Slightly shruken, available with or without buttons.

The Placket: Narrow with smaller buttons.

Shirttail: Hits about an inch and a half below the belt.


And the fabric's super soft too ... how do you achieve that?
So much of it is done in the development of the fabric now. We've got a great mill that makes amazingly light fabrics. Then we micro-sand them. And they're made to last over countless washings, which just makes them softer.

What are some of your favorite styles for spring?
We have a new model, the "New School." It's this new take on a preppy shirt—integrating a New England heritage with a New York attitude.

The Joys of Spring

It's the little things ... like a bow tie, cut from classic Thomas Mason oxford cloth.

The essential spring shoe was inspired by man's best friend ... see why the Top-Sider has endured for 75 years.