To put together an environment that works ...
We edit like a writer.
It has to flow.

I recently had the pleasure of meeting J.Crew CEO and man of the moment, Mickey Drexler in Aspen during the city's second annual fashion week. The company hosted several intimate events and the mogul was always right in the middle of the madness—meeting people, asking questions and cracking jokes. The man himself is a humble boy from the Bronx who, since his days at The Gap in the '90s, has aimed to revolutionize the way many dress. We boys owe him a lot these days. Along with designer Frank Muytjens, he's tapped into men's love of lore, offering clothes that won't break the bank yet still hold their own against a Bastian design. I pulled him aside for a quick chat after getting the inside scoop on the guy from his co-workers, err, employees, well, let him explain...

I asked some of your employees...

Right ... I asked some of your associates what
they thought your quirkiest assets are and I would
like for you to explain them to me. You game?
Game.

I hear some people call you "the Wizard of Oz" because of your love of the intercom.
It's this paging system throughout the building and what I like about it is it makes the organization feel spontaneous and emotional. It actually started on the first day I came on board. It's just so easy if you are looking for someone. When something has to get done, it gets done quickly!

I also use it as a survey technique. Who has heard of this brand? Who is from this city where we are thinking of opening a store?

When traveling, I become the 'Roving Reporter' and get on the intercom via phone and tell everyone where I am and what I've seen. It keeps it real and breaks down barriers. That's a positive. It's part of my DNA.

Speaking of which, explain the importance of open office hours everyone talks about. Anyone can come into your office and challenge the status quo?
How many people know what can be done better in their job position? Everyone. I just got a box from UPS the other day and it didn't open as easily as FedEx. So I sent a note to the CEO of UPS and said they need to improve their boxes. We should all be open to hearing what can make things better. It's what I wish my bosses would've done in the past. But sometimes I announce open hours and nobody comes in. I guess they're afraid of angering me. So I have to send out another call explaining 'I am sure someone has something to say.' Then I get the traffic flowing! 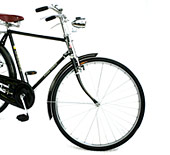 J.Crew's creative director Jenna Lyons told me that you pedal a bike around the office.
That's just fun. And seriously, it's efficient. I just do it when I get the whim. It's a Madewell bike that they showed us in a meeting and I asked to keep it. I want people to always know that I'm approachable and it makes the office much less imperial. I hate the idea of an imperial office. And I can ring my bell so people know I'm on the way to their office.

You guys have become known for curating other brands like Belstaff, Ray Ban and Alden. How did that come about?
How does anything come about, really? We talk about it and see what happens. Last time Jenna and I were here in Aspen we both bought Belstaff jackets. We were so in love with them. Then I found out a friend of mine reps them so we edited a small collection for certain stores.

We looked at things guys and gals like. My daughter used to buy Bensimon sneakers in the Bahamas and I really liked them. I showed them to the team and we started carrying some in the Madewell stores. So you see, it all comes organically from people who have a thought or idea. It makes the shop more interesting. No brand can do the best in everything. If others can do it better why not bring them in? We edit like a writer. It has to flow. We want to put together an environment that works. I start things and stimulate but it's a total staff decision.

Finally, when can we expect more men's shops like the liquor store?
Just wait till you see the new space on 79th and Madison Avenue in August. It's nothing like we have ever done before. And we're always keeping our eye open for new spaces. Stay tuned!

The number of catalogs sent out by J.Crew each year.

Grammatical corrections submitted by users have been updated in the story and cleared from the comments.

Meet the man responsible for the new J.Crew.

An ode to an American classic: the white cotton oxford.