Behind the Seams: Steven Alan

Steven Alan in his Tribeca store. (Courtesy photo)
By Cory Ohlendorf of Valet.

After his artfully disheveled (and perfectly tailored) button-downs reached cult status, Steven Alan quickly went from Manhattan shopkeep to in-demand fashion brand. So it's no surprise that his next step is a diffusion line. Well, not exactly. Lark & Wolff, his new line hitting Urban Outfitters this month, isn't a capsule collection of greatest hits. It's more of an extension of the Steven Alan way of dressing. The designer grew up in both Venice Beach and New York, so that dichotomy of prep school pomp and casual California cool weaves its way into every piece the man produces. We caught up with him in LA as he was opening up shop in his hometown and planning an outpost in Brooklyn. 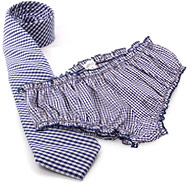 We were making shirts and had leftover fabric, and it seemed like a natural progression to make the ties. We've even used the fabric for women's underwear, and both have done very well."

He's a designer, not a fighter. Steven Alan regularly boxes ... for exercise.

Tell us about Lark & Wolff.

I wanted to design a new line that would be a youthful version of the signature subversive take on classics. So there's a retouched version of the reverse seam, for men there are unique basics--sweaters, pants, vests, jackets. I think that Urban's customers are culturally aware with individuality in their own sense of style.

Aside from the price, how will it be different from the main Steven Alan line?
I took a different approach in designing Lark & Wolff than I would for the Steven Alan line. I had to keep in mind that the Urban Outfitters product is very trend based, so there was room to get more creative with interpreting the inspiration for both lines--that classic, preppy look.

While these aren't officially "Steven Alan" pieces, one can definitely see your hand here.
Well, I tried to design peices that are stylish because they're under-styled. The key is in the details; the fabric, fit and then little details that make them special.

Where did your love for prep come from?
I actually went to both private and public school growing up, so my style became a combo of the old school classic prep uniforms with the cool trends of the time. If you saw me during high school I'd probably be wearing button down shirts under sweaters, Levis, something from the Army Navy or thrift store, and some chucks.

You started out as a retailer with just a small boutique. What drove you to start your own label?
I needed my own label because I couldn't find menswear that had the feeling I wanted. Initially I thought of it just for my shop then other stores wanted to carry it.

And boy, has it expanded. Now that you're doing accessories and suiting, do you see Steven Alan (the label) expanding into a lifestyle brand?
Yeah I have been thinking about expanding the label, but to the extent that the products are still relevant to the brand as it is now. I am working on incorporating jewelry, watches and home items as the future brand extends. I'm not interested in doing it just to do it, you know? Only if it feels organic.

You also run a successful showroom and 'Annex' stores representing up-and-coming designers and a well curated range of vintage pieces. What do you look for when you're stocking it?
We're always looking to represent designers that share our point of view, but then I'm also always looking for categories that we might be lacking in when choosing things for my Annex shops--anything from home goods or cool vintage finds.

You've been so busy this spring, opening up stores on the West Coast and planning new stores. Any plans to relax this summer?
Yes, I'm going to visit my brother in France soon, he has a great place in Normandie. And I want to go to Budapest with my son, Max.