Get to Know: Hyden Yoo

The Fearless Fashion Designer Mixes His Prep with Some Punk 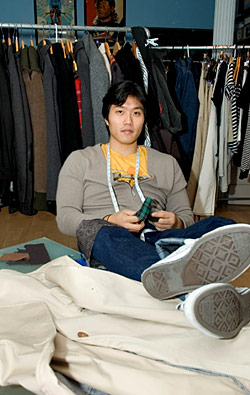 Up and coming designer Hyden Yoo has made a name for himself with his tailored, short-hemmed button-downs, but in some circles he's already famous. Or perhaps notorious. After winning fifty grand on the third season of NBC's Fear Factor, the Houston native came home, quit his corporate nine-to-five and moved to New York to pursue fashion. This fall he expanded to a full line, taking classic pieces and injecting them with a shot of cool. The label has already started selling out in stores and his Spring 2009 collection was the stand out at the Gen Art show this past September. We caught up with Yoo as he sketched out designs for next fall. 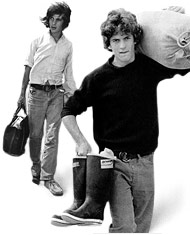 Hyden's range from John F. Kennedy Jr. ("He was really stylish, minus some of the outdoor gear) to Kate Moss (Cliché, I know, but I wish there was a male version with her style, taste and attitude). 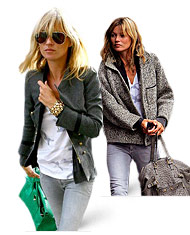 So, you got your seed money from Fear Factor. Are you trying to shake your reality TV past?

I'm kinda neutral. Now, it seems so long ago that this happened. But I definitely can't hate on it because it did give me some money to start my business. I don't mind being known as the toughest designer out there.

How did you decide to try out?
I was actually watching Fear Factor with some friends and afterwards, we were talking shit about how we'd win if we got on. I always thought an athletic Asian would be the best competitor since we're known to eat a lot of weird cuisine. So I filled out a long application and made a silly video.

And how'd that parlay into fashion?
I've always liked clothes, but it wasn't until I started hating my corporate job that I began to explore and research fashion. When the right time came, I picked up my stuff and left for New York to be fully entrenched and fully committed to the industry.

And the first collection was primarily button-down woven shirts?
Yeah. Looking back at the first set of shirts I made, I can't believe I've made it this far. They weren't bad, but they weren't good, either. Thank God I have a bunch of supportive friends that bought some of those shirts to show their love. Let's just say that the shirts have dramatically improved since then.

You've been at this for a few years now. What's been the most important lesson the business has taught you?
Never give up. There are so many ups and downs, but you have to stick with it. It takes a while to get the wheel turning, but once it does, the momentum takes you along for the ride. It's just getting that damn wheel to start turning.

Fit seems to be key with your line.
I believe fit's the most important thing a guy should keep in mind when buying clothes. Even a really boring shirt or suit can look really nice if the fit is right.

I don't mind being known as the toughest designer out there.

Tell me about the fall collection.
The fall collection is my first stab at a full collection, and luckily, it's been really well received. Since it was like a coming out party, I had to show what the brand was all about. Brooklyn hipster meets Wall Street banker is the easiest way to describe it—classic pieces with a slim fit and subtle details to add a little edge.

And for spring?
It has the same character as the fall collection, but I injected a bit of tennis into the mix. You see it in the sweaters, blazers and the short shorts. And it's a little more laid back and casual than what I'm used to designing.

When you're not sporting your own stuff, what might we see you wearing?
Jeans and a t-shirt and maybe a baseball cap.

Really?
Creative, right? Well, I'm kinda lazy when it comes to dressing myself.

Hyden Yoo is available at Oak in New York, Douglas Fir in Los Angeles, Rolo in San Francisco, Bows & Arrows in Austin and Blackbird in Seattle.